Ah… My first tastes of Ben & Jerry’s ice creams in the United States have been enjoyed under the hot Florida sun. They are Limited Edition “Cannoli” and “Late Night Snack”. 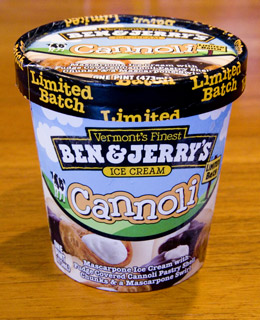 After tasting and doing some intensive research on Wikipedia, I noticed two things: 1st. the cannoli is a Sicilian pastry in the shape of a long cylinder, 2nd. I have terrible film culture, as the cannoli is featured throughout the Godfather films. Yes, I’m ashamed of myself.

The ice cream has a subtle taste, but I must confess I don’t remember what mascarpone tastes like when eaten with a spoon, so I can’t attest to its accuracy.
The mascarpone spiral is white-on-white and therefore almost invisible. One can only see the difference when a light is shone directly onto it.
The chunks of cannoli are present in large numbers and have a very strong taste. Chocolate isn’t the only culprit. I recognize the taste of alcohol (but my tastebuds are usually very sensitive), which should be Marsala from the recipes I found online. So, obviously very close to reality there. A good sign.

The overall taste is not as strong as with some other flavors and is therefore not my favorite, but it is still worth a try.

This ice cream was inspired by late-night talk show host Jimmy Fallon. For those of you who don’t know who he is, you’ll find a geeky video featuring him at the end of the article because, well, this is a Geek World Tour…

Now back to the ice cream.
The vanilla has a very mild taste. Maybe too mild. Perhaps this is because it is made with vanilla extract rather than vanilla beans themselves.
The caramel is delicious. Just a hint of saltiness. Perfect.
The potato chips are interesting… Crisp in texture, making it a weird experience.

The flavors, however, blend very well together. It’s a real success.