Of all the typically American things I’ve promised myself to try during my trip (drive a muscle car, see a Broadway Musical…), this is one which will take some time to accomplish: Taste all the flavors of Ben & Jerry’s ice cream. 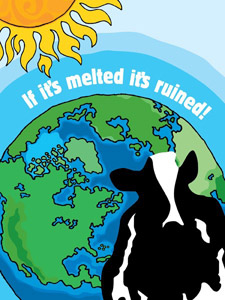 Okay, so, first of all, I am NOT sponsored by Ben & Jerry’s (but I won’t object if they want to offer me free pints!

Ben & Jerry’s is a brand of ice cream created in 1978 by Ben Cohen and Jerry Greenfield in Vermont, which also happens to be one of the coldest states in the U.S., but I digress…
Voted “Best Ice Cream in the World” by Time magazine in 1981, the company soonafter became a huge international success.

The main characteristics of this brand are the extravagance of the names and the mixtures of flavors. No more simple chocolate or vanilla ice cream. Try an Chunky Monkey: Banana ice cream with nuts and pieces of banana-shaped chocolate. “If it’s not fun, why do it?”

Another great feature is the Fairtrade logo. All their products are certified in Europe.

When I tasted their ice cream for the first time, I was hooked. Caution, these little pots aren’t so small as you think!

But how frustrating it is to see that France only offers 5-6 flavors (perhaps more around Paris), whereas there are more than 40 in the United States.
So, there you have it. I’ve started this challenge before leaving the US: Try them all!

There are so many, so there’s no time to lose!