Why Jailbreak your iPhone for travel (Part 1)

In one’s own country, an iPhone can be very practical with a 3G package that works very well featuring Google Maps when you’re lost and email updates keeping you connected day and night. But abroad, an iPhone (or any smartphone, really), the cost of 3G roaming can be crippling… So, we’ll discuss how to find WiFi easily during your travels.

The term “jailbreak” refers, as you anglophones already know, to a prison break, but since we’re talking about the iPhone, to “jailbreak” means to circumvent the limits imposed by Apple of installing certain software. Indeed, all installable software on iOS platforms (i.e. iPod, iPhone, iPad), must first be approved by Apple, whose criteria is very restrictive and therefore unavailable for download via the App Store.

Anyway, I will not explain how to jailbreak your iPhone. There are many other websites which explain the procedure in detail, ask Google. 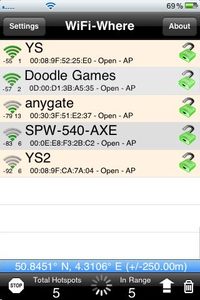 This little gem of a software program is called WiFi Where Lite. It scans available WiFi networks. Note that I am not talking about trying to penetrate protected WiFi networks but simply to discover open networks and thus potentially allowing you to connect to the internet.

Seriously, it’s horrible when on holiday to be forced to run around in circles looking for a free access point. Like McDonalds or Starbucks are on your list of notable sights to see. And it isn’t always profitable. For example, the McDonalds in Sardinia asks your phone number so as to send the WiFi password via SMS….

WiFi Where will allow you to scan the surrounding networks using nothing more than a wish and an incantation of “open sesame!”

To use this app, you must configure it after downloading from Cydia

Then, on the main screen, click the icon at the bottom left.
Walk keeping the iPhone in your hand or pocket; when it vibrates, it’s trying to connect.

You will need more or less time in certain locations. Strangely, the larger the city, the harder it is to find free WiFi.

And be careful of your battery. GPS and WiFi searches consume a lot! 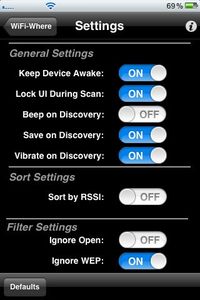 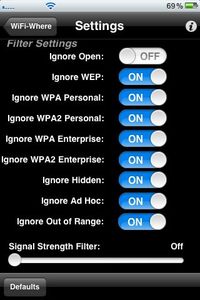